I have been appointed as the Royal Artist and commissioned to paint portraits for the entire Royal Hedgehog Family of North America.  We are starting with the current Queen and working our way backward.

HRM Queen Louella of Lafayette was six years of age on March 22, 2011. Her Majesty, the 14th Hedgehog Monarch of North America, succeeded HRM King Orbit the Spy on July 4, 2010. By the Rules of Precedence, Louella should have assumed the Throne upon the passing of Queen Sable the Serene on December 25, 2010, but she and the other Ministers unanimously acceded to Orbit, who was the senior minister at the time but generally not eligible due to his being the Advisor to the Crown.  All of the Monarchs have left their own personality stamp on the Realm and it seems that HRM Queen Louella is getting quite the reputation of being a zany stand-up comedian. From her incognito entrance into the Milwaukee Show under an assumed name (and winning enough awards to garner 18 show points and a Permanent Grand Champion award) to her last two "Royal Quill" editorials in the IHA News, her sense of humor is ranging up there with the best of them.  Queen Louella, therefore, is the first of the hedgehog Monarchs to hold the Crown as both a ministerial appointee and as a Permanent grand Champion.  So, were HRM Queen Louella to be a human, she would be 88 years of age. She is doing very well, but her weight has fallen recently to just under 400 grams, having held steady at 440 for the last eight months.  In addition to her sparkling sense of humor, Queen Louella is an exceptionally kind, gentle, outgoing, and extraordinarily wise hedgehog

King Orbit had lived on this earth for five years, seven months, and 17 days.  He led an amazingly varied life, as a corporate mascot, military intelligence officer, Airborne brigade commander, ministerial advisor to HRM Queen Sable the Serene, and finally, in a very unusual acclamation by all of the serving ministers, assumption of the Throne on December 25, 67100064 (2009).  King Orbit was the Thirteenth Hedgehog Monarch of North America, and carried out his responsibilities with great humor, candor, and approachability.  He leaves behind a wide circle of friends.  The Court Physician has tentatively diagnosed his departure as caused by kidney failure attributable to advanced age.  In his final days he was not in pain and was very calm and still very much alert.
There is a great pall of sadness here, as every one of us in residence do not remember any moment when our friend Orbit was not with us, for he was the longest serving resident here, and greeted each and every one of us as we often fearfully arrived with his jovial sense of warm abandon and kind fellowship.  He carried all of that with him to the Throne, and even turned his back on living in the Royal Suite, rapidly making his preferences known to stay where he had been living in the little corner condominium in the high-traffic Dispensary, where he could see what was going on and interact with his friends.  Taking this departure hardest is Old Man Herbie, the Minister of Time and Tradition and counselor to The Throne.  Orbit and Herbie have a lot of memories here together.  Orbit arrived here just over two months before Herbie came in from California , with Herbie being just one month older than Orbit.  Although only serving as the Monarch for six months, as with many of the Monarchs, Orbit came to the position late in life after a long and rich life of service.

Her Majesty succeeded King Walter the Wise as the Hedgehog Monarch of North America on May 15, 67100062 (2008 in human years) and served for 19 months and ten days, the second-longest reigning Monarch, after the 24-month tenure of King Pyewacket of the House of Holmes in Toronto from June, 67100060 (2002) until June, 67100062 (2004).  Queen Sable the Serene was well known within the North American hedgehog community, and presided over many events, such as both the Milwaukee and Rocky Mountain Hedgehog Shows and the 67100063 Hedgehog Day Tea.  Her Royal Quill editorials in each of the International Hedgehog Association News publications during her tenure were incisive, witty, and memorable.  A hedgehog of authoritative size and manner, there was little doubt as to who was in charge.  She ruled the Court with a benevolent, yet iron paw.
In her last hours, Her Majesty asked me to deliver this notice to the hedgehog community, and to include her thanks to all for making her reign a time of solidarity and promise for all of us on this continent.  She imparted that she is very proud of the entire community for its solidarity and dedication to rescue and care for over eight hundred of our sisters and brothers recently liberated from that death camp in Texas .  She wishes us all well, and particularly wanted to thank our Le Ministre du Defense, Seamus, for his thoughtful service in thanks to our veterans, our senior military commander, Lieutenant General Biggs, and her loyal and dedicated counselor, the Minister of Time and Tradition.  In a special and fond remembrance, she wished to particularly thank Mr. Floyd Aprill of Milwaukee for his hospitality and unending kindness to all, hedgehog and human alike.

Walter, IHR 14637, was the son of Miss Pinny Cushion and Quilliam (IHR 10233).  His ancestry goes back five generations on his father's side.  His earliest IHR Registered relative was a great-great-great grandfather, Sgt. Gunney, IHR 839.  He had five other ancestors in the original three-digit Registry.  He was born in Chehalis , Washington and moved to Eugene , Oregon .  He moved here to Flash and Thelma as an educational hedgehog on June 6, 2005 at nine months of age.  In his nearly three years of residence here, he was a delightful big fellow that loved interaction with humans and served well on our Road Crew of educational hedgehogs.  Entering the Rescue at 558 grams, he was placed on a low fat diet for a while, but simply did not look very good as his weight diminished to the low 400s.  For most of his stay here he weighed in the 650 to 750 gram range and carried his weight well.  Early on considered the Captain of our Educational Road Crew, Walter went on every educational event during his time here - schools, libraries, the local Dinosaur Center , both 2005 and 2007 Colorado hedgehog shows (where he accumulated 9 show points during the 2005 show).  His last public appearance was at the Hedgehog Day Tea in February, 2008.  Appointed as Minister of Foreign Affairs of the North American Hedgehog Government, he later assumed duties as the Hedgehog Monarch of North America upon the death of HRH King Tiggywinkle on April 4, 2007.  Most of you who are IHA members know Walter best from his Royal Quill editorial pieces that appeared in every issue of the IHA News during his reign, six issues in all.

The Tenth hedgehog Monarch was a ministerial appointee that  immediately succeeded King Reggie and served in the Monarchy for four months from December 2006 until April, 2007.  He was a sweet-tempered soul that was loved by all, and of all of the Monarchs, probably came from the most harrowing background to date.  Tiggywinkle was the name given to him as a fugitive as he entered a hedgehog version of the Federal Witness Protection Program.  At a little over one year old, weighing 268 grams, he was stolen in the middle of the night from a group of drug dealers by a concerned individual that thought he was being neglected.  He arrived at the Flash and Thelma Rescue dehydrated and very hungry and dirty.  Tiggywinkle thrived almost immediately after his arrival and proved to be an inspiration to all who knew him.  Although it is sometimes hard to tell with hedgehogs, Tiggywinkle always seemed to have a smile on his face.

Reggie the Ancient, the IX Hedgehog Monarch of North America was both the oldest hedgehog Monarch to serve on the Throne, but also served for the shortest term, only four days.  However, he probably did more in those four days to guide the course of the Hedgehog Monarchy than any other of the Monarchs.  Upon accession to the Throne on December 11, 2006, Reggie was the only remaining Minister of the Hedgehog Government of North America, as none had been appointed when prior ministers traveled on.  Also, with the passing of HRM King Boris, there were no surviving IHA Permanent Grand Champions.  Over his four day reign, King Reggie appointed a full Cabinet of four Ministers, one per day, thus establishing an order of precedence for the Monarchy should there be no new IHA Permanent Grand Champions.  All four of his appointees would go on to assume the Monarchy – Mr. Tiggywinkle, Walter the Wise, Sable the Serene, and Orbit the Spy.

Reggie was a delightful old fellow who was both mellow and wise.  Along with the venerable Hoskins, he was also the slowest hedgehog ever encountered at Flash and Thelma.  He never ran on his wheel, just casually strolled.  He was even exceedingly slow to gain and lose weight.  King Reggie traveled over the Bridge at eight years and two months of age, making him the equivalent of a 100 year old human. 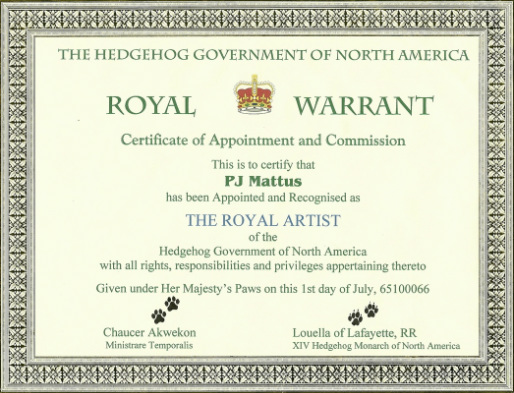 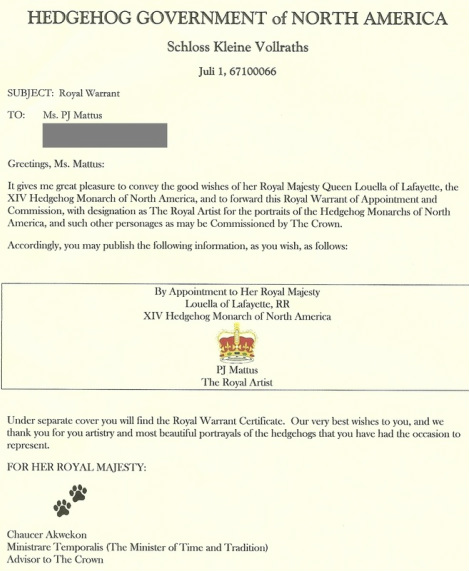